You are here: Home / Player Traits

The Games User Research (GUR) community has been collectively working towards understanding how player preferences and experiences can be understood and classified. A validated model of player motivations and behaviours can help game designers create games better targeted to their audience. But despite the efforts of the community and the recent advances, we still lack a definitive player traits model and a validated survey to score people on each trait. Therefore, after years of research, the HCI Games Group developed a new Five-Factor Player Traits Model, based on the existing literature and our own research studies. 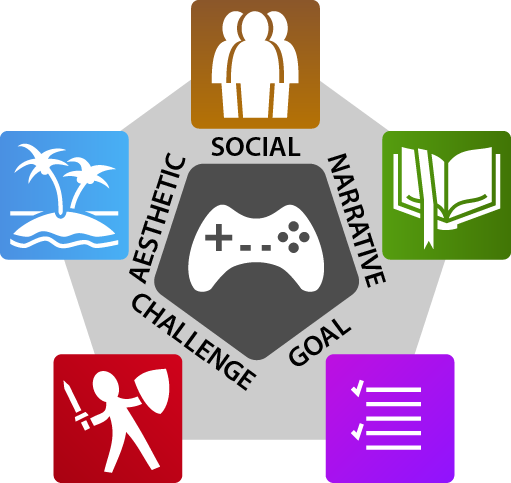 This trait measures the player’s preference for aesthetic experiences, such as exploring the game world and noting the game’s graphics, sound, and art style. Players who score high on this trait enjoy aesthetic experiences in games, such as exploring the world, enjoying the scenery, or noting the quality of the graphics, sound, and art style. On the other hand, players who score low might focus more on gameplay than the aesthetics of the game.

This trait measures the player’s preference for gameplay that involves completing quests or tasks, collecting digital objects, or similar experiences. Players who score high on this trait enjoy completing game goals and strive to complete games 100%, explore all the options, complete all the collections, and so on. On the other hand, players who score low might leave optional quests unfinished, and are usually more relaxed if they do not complete a game 100%.

“I don’t fit into a single type”: A Trait Model and Scale of Game Playing Preferences

Use the scale in your research

Please see these summarized instructions to use the scale in your research project: The scale and instructions are available in multiple languages.